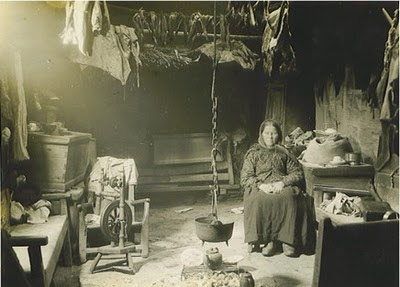 In one of his last fieldwork notebooks when Alexander Carmichael was in and around Ross-shire collecting as much material as he could and where he managed to pick up a pithy little anecdote about ceilidh protocol:
When a man was put out of
the ceilidh for not having a story
He called out “Fear ionad fear
Ionad” – a man came forward
Siu[tha]d tha mise seo ga do shaoradh
He then got back. If he had a
sean fhacal he got off.


It may well be imagined that the ceilidh used to be a very informal social affair where anything went and there was not a sign of any organisation but this anecdote reveals that there were some ‘unwritten’ rules to be followed and that a protocol existed that was to be adhered to even if this was not to the actual letter. This anecdote may also be interpreted as some sort of get-out clause for if anyone was expected to participate by telling a story or singing a song but they were, for some reason or another, unwilling or unable to conform to everyone else's expectations, then they could revert to the phrase “Fear ionad” indicating that someone else, who was willing enough, would take their turn instead. It also appears that by simply reciting a proverb seems to have been enough satisfy the rest of the company. But merely reciting proverbs could hardly be described as the stuff of a good ceilidh!
Reference:
CW 117, fo. 23v.
Image:
Blackhouse interior.
at 16:21