ook Week Scotland continues with two entries about one woman from Carmina Gadelica. These demonstrate well the personal details which Alexander Carmichael collected and which undoubtedly enhanced the folklore he recorded. It has to be said that on occasion he appears to have confused some people or misrecorded information but given the hundreds of individuals with whom he interacted it isn't entirely surprising that there are a few errors.

Be that as it may, the descriptions of the Harris dairywoman, Màiri Nic Rath [Mary Macrae] in Carmina Gadelica are corroborated by Carmichael's original notes, which are part of the Carmichael Watson Collection: notebook Coll-97/CW87/67 giving us a description of this lively nonagenarian. In addition, the published versions, given below,  mention useful historical information and surprisingly even refer to the literary figures of Bowell and Johnson.


This poem was taken down in 1866 from Mary Macrae, Harris. She came from Kintail when young, with Alexander Macrae, whose mother was one of the celebrated ten daughters of Macleod of Rararsay, mentioned by Johnson and Boswell. Mary Macrae was rather under than over middle height, but strongly and symmetrically formed. She often walked with companions, after the work of the day was done, distances of ten and fifteeen miles to a dance, and after dancing all night walked back again to the work of the morning fresh and vigorous as if nothing unusual had occurred. She was a faithful servant and an admirable worker, and danced at her leisure and carolled at her work like 'Fosgag Mhoire,' Our Lady's lark, above her.

The people of Harris had been greatly given to old lore and to the old ways of their fathers, reciting and singing, dancing and merry-making; but a reaction occurred, and Mary Macrae's old-world ways were abjured and condemned.

'The bigots of an iron time
Had called her simple art a crime.'

But Mary Macrae heeded not, and went on in her own way, singing her songs and ballads, intoning her hymns and incantations, and chanting her own 'port-a-bial,' mouth-music, and dancing to her own shadow when nothing better was available.

I love to think of this brave kindly woman, with her strong Highland characteristics and her proud Highland spirit. She was a true type of a grand people gone never to return.

The wonderful woman who sang this song and many other songs to the writer has been described earlier (i. 4 f.). Mary Macrae, known as Màiri Bhreac, Màiri Bhanchaig, was dairywoman with Alexander Macrae of Hùisinis, Caolas Stiadar, Harris. In her ninety-ninth year she was hale, strong and comely, having been ill but once in her life, and that with smallpox. She had been always an active and excellent worker, bright, cheerful, and good-humoured, and these qualities she retained to the end of her days. She sang this song with remarkable effect, as if she were in her nineteenth rather than her ninety-ninth year.

She attended church every Sunday, no matter what the weather might be. If the tide was out she came across 'Tràigh Chliamain,' St Clement's Strand, which shortened the way, though wet; if the tide was in she had to come round the bay, which made the distance much longer. One stormy day of wind and snow the minister, Mr Charles Maclean, expected no one to come out in such weather; but, lest any should, he went down to the church. To his astonishment he found Mary in her usual place, alone in the church.

'A Mhàiri, a Mhàiri, 'd é thug a mach sibh an diugh ri leithid seo do latha, agus sibh leibh féin?'
'Mary, Mary, what has brought you out on such a day, and all alone?'

'Nar bheil mi liom féin idir, a Mhaighstir Tearlach, is mi nach bheil. Bha triùir chairdean caomh caomhail liom gach ceum dha'n t-slighe tighinn.'
'I am not alone at all, Mr Charles; far from it. There were three dear and loved friends with me every step of the road coming.'

'Bha triùir chairdean coamh coibhneil liom gach ceum dha'n t-slighe, - an t-Athair agus am Mac agus an Spioraid liom gach ceum dha'n t-slighe,' arsa Màiri. Chuir Màiri Nic Rath agus am freagairt a thug i, gun facal sgoil 'na ceann, agus i faisg air ciad bliadhna dh'aois, gu smaoin am ministir mar nach do chuir dad riamh roimhe na 'na dhéidh.
'Yes, there were three dear kind friends with em every step of the way, - the Father, the Son and the Spirit were with me every step of the way,' said Mary. Mary Macrae and the answer she gave, though she had not a word of schooling in her head and she was close on a hundred years old, made the minister think as nothing before or since.
Alexander Macrae whose dairywoman Mary Macrae was, had come from Aird an t-Sobhail, Kintail, to live in Harris, and was known as 'Fear H­ùisinis,' the laird of Hùisinis. His brother was Sir John Macrae, general of India. Sir John, who was an able musician, sent to his brother for this song, and played it before Queen Victoria upon the pipes.

Mary Macrae, dairywoman, said that this song was sung by a woman whose mind was deranged by a sudden fright when she was but newly risen from childbed. She fled to the hills and lived in the 'frìth,' forest, with the deer, going with them wherever they went. The people of the town-land often saw and followed her, but they could not keep her in sight, far less catch her. At length a 'brocair,' foxhunter, found her asleep and came upon her from behind.

'Shuain an sealgair a folt fada m'a ghàirdean doisgeil, agus cha b'àil leatha teicheadh. Mo ghaol air féin! nach e bha tapaidh!' arsa seann Mhàiri bhochd.
The hunter twined her long hair around his left arm, and she had no wish to flee. My love on himself! was he not brave!' said poor old Mary.

The sudden start she got put back her heart in its place, and she became quiet and gentle. The hair of her head reached down to her heels, and her body was covered all over with downy hair, a touching sight to see. The hunter put his 'breacan-guaille,' tartan shoulder-plaid, about her, and she came home with him quite quietly. This happened in Lochaber. 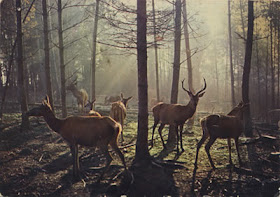